This War of Mine has a fairly basic combat system. Interactive combat only occurs while scavenging and the player only needs to control one character. Scavenging characters can use melee weapons or firearms against civilians, thugs, and heavily armed soldiers. Melee weapons can be used to stealthily attempt a backstab. Firearms combat incorporates a cover system to mitigate damage from return fire.

Combat is driven by first clicking on a weapon in the top-left corner of the game screen; you must choose to leave Scavenge mode to initiate an attack. After that, click on the "attack" icon next to a target, represented by a white fist, knife, or cross-hairs, depending on your weapon.

Fists: Unarmed survivors will be forced to use their bare fists when scavenging and defending the shelter. Scavenging survivors can attempt to punch adversaries, though─depending on each individual survivor─they will typically miss or inflict very low damage. Survivors defending the shelter unarmed will typically get wounded and have supplies stolen from the shelter. Roman has the distinct advantage of being able to wait in hiding spots and kill passing enemies with his bare hands.

Cover: after entering combat mode, icons representing areas of cover will be revealed. Survivors can use cover for a defensive bonus against firearms.

There are 5 tiers of Combat Proficiency among the survivors. All characters were unarmed and the test target is Matey and Emil, who have a same white area scale for the same character, although Matey was equipped both, a gun and a knife, while Emil had only knife. 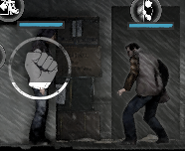 In summary, the amount of white overlay depends on several factors:

Old or sick civilians are less likely to fight back, such as the sick wife at the Quiet House or sick father at the Garage .

During each melee attack there is a chance that an opponent can successfully defend against the attack or get hit. To calculate hit chance, the game most likely uses a Random number generator. This number is compared against a base chance (consisting of Melee Proficiency, weapon used, opponent's Melee Proficiency, opponent's melee weapon used, etc.) to determine if a successful attack occurs. For example, soldiers tend to evade attacks more often than civilians, so they must have a different base chance to-hit. Whether or not the attack is successful must be calculated using a random number.

Some characters have a higher Melee Proficiency than others, which can affect the chance to hit.

Emil's white area overlay of the attack icon is equal to Matey's - that suggests firearms don't modify the white overlay, only melee weapons do.

The white overlay is full because Grisha is unarmed

Wielding a Shovel, Bruno has higher damage and a higher chance to attack successfully per turn

Wielding a Shovel, Roman has higher damage and a higher chance to attack successfully per turn

Similarly, equipping a firearm will create an overlay to appear over the cross-hairs reticule. It is implied that this overlay also represents the hit-chance.

Some characters have higher health than others, thus making them better choices in combat. Boris takes 5 hits to die by Emil (who is armed with a knife), while Roman takes 4 and others take 3 hits. However, health doesn't modify the white area scale of the attack icon.

Some civilians have lower health than other in spite of having full health bar, such as the old couple at the Quiet House.

Attacking an unaware enemy, from behind or from a hiding spot, will replace the melee icon or fist icon with an orange stabbing symbol. Clicking this icon allows you to perform an ambush which can instantly kill or at least critically injuring an adversary in full health.

The game automatically equips the strongest melee weapons while scavenging in order:

Crowbar is the weakest melee weapon, which deal much less damage than others in both direct melee combat and ambushes.

The information below is tested for all characters:

Stealth-ambushing refers to the act of attacking the unaware target in melee when he/she walks/runs past the hiding spot that you are in. It is the strongest combat action in game which can almost guarantee to instakill your target. All locations in game─even the most dangerous ones─can be cleared with stealth-ambushes well managed by wisdom and skills, without deploying firearms, risking attracting adversaries to swarm you and wasting precious ammunition.

Backstabbing refers to the act of sneaking behind your target and attack them in melee from behind. Unlike stealth-ambushing, backstabbing deals much less damage than the former, this makes backstab instakill almost impossible on most characters. Roman, Arica and Boris are the only exceptions.

Running before backstabbing usually leads to failure, as the footsteps alerts the target. The only exception is on Arica, whose special ability 'Sneaks Quietly' enables her to produce minimal noise in all actions, thus enabling her to run behind the target without being detected. Therefore, she becomes the best choice for players who like to clear maps with backstabs quickly.

NPCs seem to have a well programmed AI that sometimes completely catches the survivor off guard, while sometimes several of them walk into the same death trap over and over again. Some notable behaviour can be witnessed, such as:

Community content is available under CC-BY-SA unless otherwise noted.
Advertisement